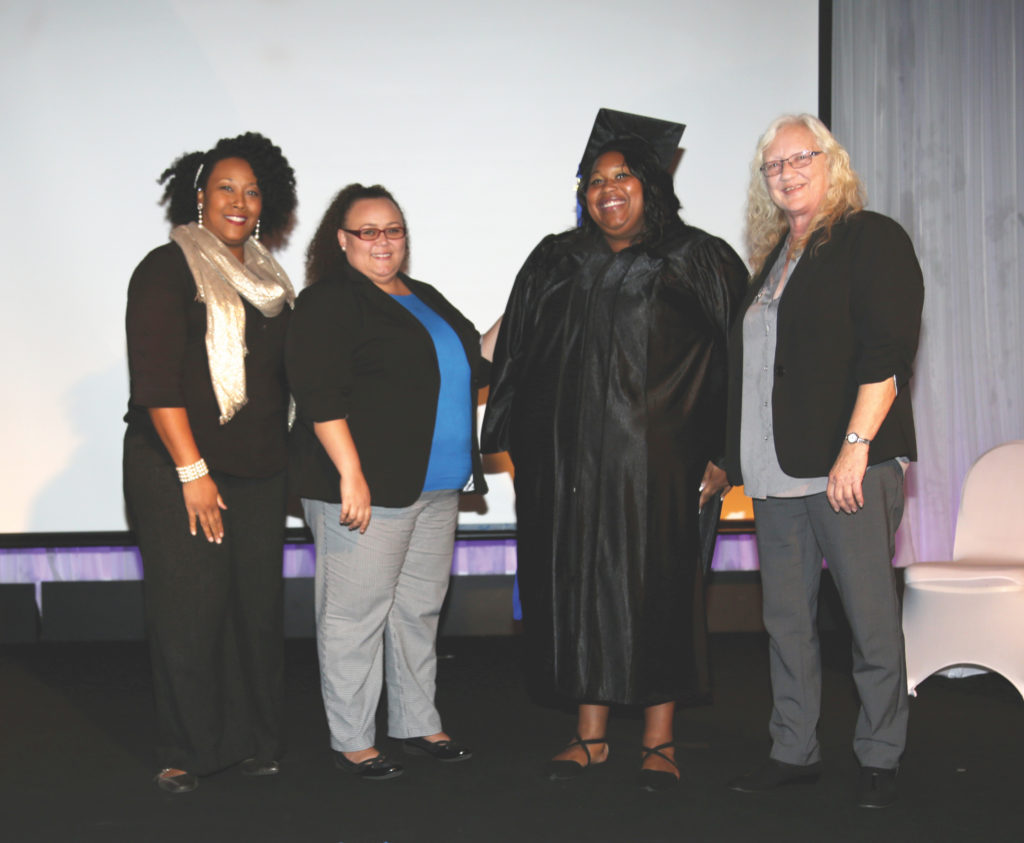 When asked for one word to describe herself, Aurora Butler did not hesitate. “Adaptable,” she said. “I am always able to adapt to my situation and make it work for me.”  Although these past few months have been difficult for Aurora, as the sole provider for her three children she could not give up.  She was determined to keep pushing forward and that perseverance has paid off.  Aurora has found her dream job at St. Elizabeth Healthcare.

Aurora’s journey with Brighton Center began over two years ago.  The community of City Heights was hosting a job fair.  Aurora is a resident of City Heights and decided to attend the event with a friend.  At the job fair, she met a representative from Brighton Center’s Center for Employment Training (CET).  The following week, Aurora attended an info session and enrolled shortly after.  Aurora has never doubted that decision and credits CET for providing the foundation she needed to be successful.

After graduation, Aurora was hired as a medical assistant at Christ Hospital in Cincinnati.  Aurora does not own a vehicle and had to rely on public transportation.  Despite the almost hour and a half daily commute each way, Aurora was able to maintain employment at Christ Hospital for close to a year.  In late March 2019, Aurora was informed that her daycare provider could no longer provide daycare coverage after 6:00 p.m.  With the length of her commute, it was impossible for Aurora to maintain her position at Christ and be back in time to pick up her children for daycare. This left Aurora with no other choice but to resign her position at Christ Hospital.

After resigning from her position, Aurora found herself feeling depressed.  She knew that she needed to busy herself doing something useful until she was able to find employment.  Aurora took two important steps that set her on a new path.  She reached out to her Career Coach at CET who set up an appointment at the City Futures office in City Heights.  Aurora met with her Career Coach and the Career Developer with the City Futures program to update her resume and initiate a job search.  Aurora began to volunteer daily at the City Futures office and is now serving as a Community Coach.  As a Community Coach, Aurora is a part of City Futures team working with the residents of her community on their career pathway.  While she continued to search for employment herself, Aurora assisted customers with building their resume, completing applications, and connecting to resources in the community.  Then, the call she had been waiting for finally came.  St. Elizabeth Healthcare wanted her to come in for an interview.

Aurora worked with the City Futures Career Developer to get ready for her interview.  With assistance from the Family Centered Coach at the Kentucky Career Center, Aurora did mock interviews to help prepare for the big day.  They reached out to Dress for Success to assist with clothing for the interview.  Aurora was nervous, but feeling confident.  She knew she had what it took to be successful.  Then came the good news, Aurora got the job!

Adaptability and a belief in herself.  Those were the keys to opening up a whole new future for Aurora.  When learning of her new career at St. Elizabeth, Aurora felt that she had “overcame the impossible.”  She had wanted to work at St. Elizabeth since she had interned there in 2017.  After her internship, St. Elizabeth did not have any openings and Aurora took the position at Christ Hospital.  Over the past two years, she applied for a number of positions but had been unable to breakthrough.  Aurora kept pushing, never giving up on her dream.  Today, she has accomplished her goal and is ready to begin working on her next.  She is working with a financial coach through the City futures program and her next goal is to purchase a car and then eventually a home.

Aurora continues to serve as a mentor and role model for her community.  She participates in programs and events sponsored by the City Futures program and encourages her friends and neighbors to do the same.  Aurora knows that her story is a story of empowerment.  She readily shares it to offer hope to others and to let them know that dreams really can come true.