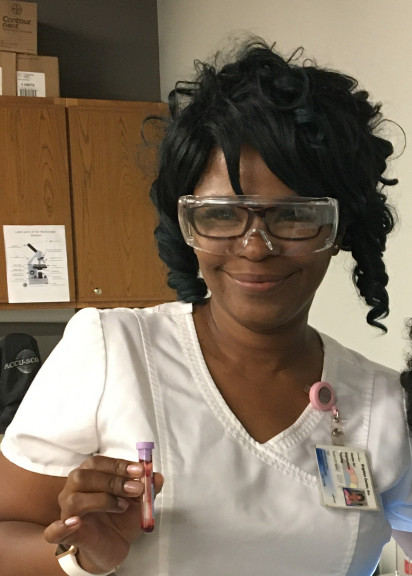 Stephanie was a State Tested Nursing Assistant (STNA) who was considering her next career steps when she learned about Center for Employment Training’s Medical Assisting program in 2018.  Although she loved her job, the work was physical and was beginning to take a toll on her body.  Stephanie had always been interested in furthering her education in the medical field but the responsibility of caring for her family prevented her from following her dreams.

Stephanie wrestled with apprehension and self-doubt before deciding to take a chance and enroll at Center for Employment Training (CET).  The idea of going to school was intimidating to her.  She wondered if she was capable of learning new things.  Like many single parents, Stephanie made the decision to forego post-secondary education for herself so that she could work to provide for her children.  After becoming a mother at the age of 14, Stephanie discovered early on that she did not want her life to be wrapped up in navigating government assistance programs and entered the workforce to support her young family.  Plus, the world that Stephanie knew as a mother was familiar and safe.  Being the only girl and the youngest child raised in a house full of boys, Stephanie assisted with taking care of the household while her mother worked.  After spending nearly 25 years of providing for others, now was the time for Stephanie to provide something for herself.

At first, Stephanie struggled to adjust to job training and the culture at CET.  She constantly worried that she wasn’t young enough or wasn’t smart enough.  She also feared that people would not accept her.  Growing up in a world plagued by racial tension and a lack of equity, Stephanie wasn’t sure that she would fit in in a physician’s office setting.  Although still uncertain, she was willing to do the work she continued to show up.  By building relationships with her instructors and coaches as well as her fellow trainees, Stephanie pushed through her apprehension and learned to find comfort and strength in voicing her fears and concerns.

As she continued to build relationships and learn new things at CET, Stephanie began to think of Brighton Center as a safe place.  When faced with adversity, she found support.  While attending CET Stephanie experienced numerous medical, financial, and family issues – all things that could have caused her to put her dreams on hold again.  Always self-reliant, Stephanie continued to work while attending CET full-time; however, she now felt comfortable engaging with Brighton Center’s community of support.  Stephanie accessed emergency assistance through the Family Support program and received assistance with food, rent, and utilities.  She also was able to obtain diapers and holiday presents for a grandchild in her care.  While at CET, Stephanie worked on her budget with her Financial Wellness Coach and updated her job search skills with her Career Coach.

Finally, Stephanie had conquered the ins-and-outs of Medical Assisting.  An externship opportunity became available at a Women’s Health office.  Although hesitant about this new experience, Stephanie embraced her newfound skills and growing self-confidence and gave it all she had.  Others took note as well!  At the end of her externship, Stephanie expressed shock when she received the results of her externship evaluation: exemplary in all areas!  Her office was so impressed that they also offered her employment.  In March of 2020, Stephanie became a Medical Assistant at a prominent Cincinnati healthcare organization.

Until this moment, Stephanie had never truly experienced a win of her own.  After years of celebrating others, never did she think she would be able to celebrate herself.  Through her commitment to her goals, Stephanie not only gained new skills and a career, but also learned that she is intelligent, capable, and worthy of all of the fruits of her hard work and dedication.